The Israeli military launched airstrikes on Hamas targets throughout the Gaza Strip on Thursday night in response to ongoing arson attacks from the enclave, the Israel Defense Forces said. A month after an 11-day conflict raged between Israel and Hamas, with the fragile ceasefire under heavy strain, the army chief ordered the IDF to prepare for a resumption of fighting.

Rocket warning sirens wailed in the Israel community of Kfar Aza near the Gaza border following the Israeli strikes after midnight Thursday. The IDF said these were triggered by “non-rocket fire from Gaza toward Israel,” however. The Ynet news site suggested the sirens were triggered by machine-gun fire from the Strip aimed at Israeli aircraft.

At least eight fires were sparked in southern Israel on Thursday, four on Wednesday, and more than two dozen on Tuesday, by balloon-borne incendiary devices launched from the Strip, according to Israeli Fire and Rescue Services.

According to Palestinian media, one Israeli strike Thursday night targeted a Hamas-controlled building in the Gaza city of Beit Lahiya. Additional strikes were reported on a six-story Hamas-run civil administration building in northern Gaza, a Hamas base near Khan Younis, a site near Gaza City, and agricultural fields allegedly housing underground rocket launchers in southern Gaza. There were no immediate reports of Palestinian injuries.

The IDF confirmed conducting the strikes, saying the targets included a launchpad near Khan Younis, which could be seen in video footage shared on social media (below), and various other Hamas military sites in the Strip.

“The attack was carried out in response to the continued launching of incendiary balloons at Israeli territory,” the IDF said in a statement.

The attacks were far greater and more forceful than those launched earlier this week in response to similar airborne arson attacks from the Strip and appeared to be the most significant retaliation by Israel to incendiary balloons in the three years since Palestinian began using the tactic.

The raids were also meant to serve as a threat to Hamas of Israel’s willingness to conduct further strikes if attacks persist, officials said.

“Earlier this evening, the chief of staff held a situational assessment in which he ordered a higher level of preparedness and for the IDF to make preparations for a variety of scenarios including a resumption of fighting in response to continued terrorist activities from the Gaza Strip,” the IDF said.

The military added that it held Hamas responsible for all violence coming from the Strip and would “continue to destroy the terror group’s capabilities and infrastructure.”

“The occupation bombing of resistance sites is simply meant for show, an attempt by the new government to raise the morale of its soldiers and commanders after it collapsed” in the last round of fighting, said Hamas spokesperson Fawzi Barhum.

He also warned of renewed fighting if Israel “continues to commit idiocies and target our people.”

According to a Channel 13 news report Thursday, an Israeli delegation in Cairo for talks with Egyptian mediators — working to preserve the fragile ceasefire that ended last month’s bout of fighting — has warned that if the balloons continue, Israel could launch a follow-up to the 11-day campaign.

Hamas has repeatedly asserted that the balloons are legitimate “popular action” against Israel and should not be considered a violation of the ceasefire. But Israel rejects such claims, and aims to force Hamas to reconsider the value of its balloon attacks.

Video of an IDF strike toward a Hamas site in northern Gaza this evening. pic.twitter.com/HdhApGtxXx

For the past three days, terrorists in the Strip have launched balloons carrying incendiary and explosive devices into southern Israel, violating  the fragile ceasefire agreement.

After the first day of arson attacks, Israel launched retaliatory strikes on two of Hamas’s positions in the Strip, but it refrained from doing so on Wednesday, after receiving assurances from Egyptian mediators that Hamas would stop the attacks in order to avoid another confrontation.

The balloon-based attacks resumed on Thursday, with at least seven fires being started in open areas of the Eshkol region, and another in a field in the Sha’ar Hanegev region. 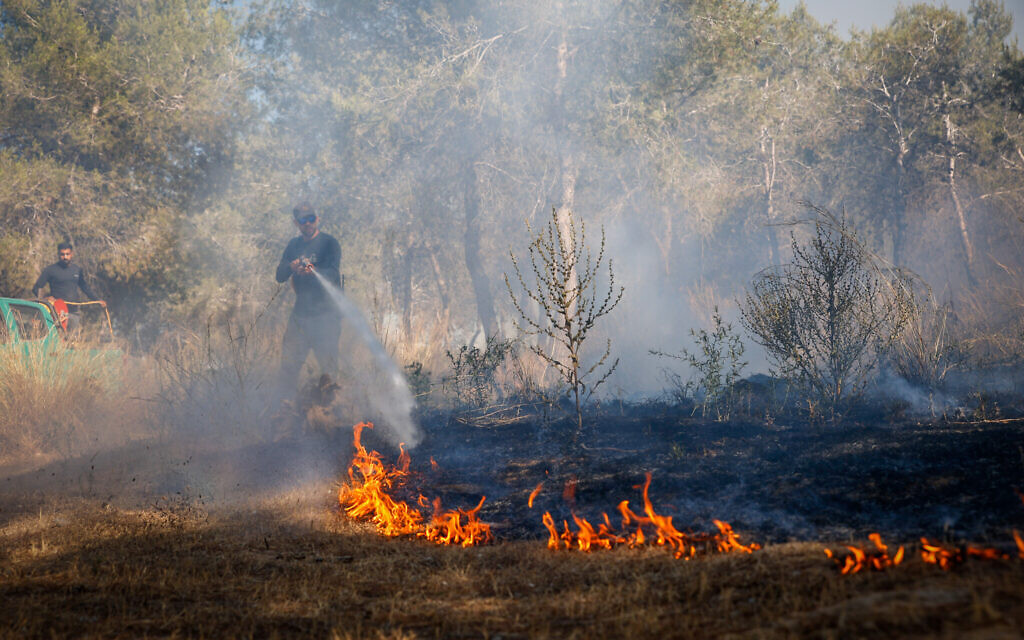 Firefighters try to extinguish a blaze in southern Israel that was sparked by a balloon-borne incendiary device launched by Palestinians in the Gaza Strip, June 15, 2021. (Flash90)

Firefighters, along with IDF units and teams from the Israel Nature and Parks Authority, brought the flames…

Palestinian workers in Israel: Seizing opportunity or being exploited?